Oracle MBaaS Based on Parse

Over the last 6 months, the team has been working on a Parse storage Adapter for Oracle Autonomous Database. We have released a POC that provisions Parse Server and the Dashboard to a Kubernetes Cluster that is configured to hit an Oracle Cloud Database. More can be found here:

Over the last year, I have been working with a team that added an Oracle Storage Adapter to Parse Server which is part of the Parse Platform. The docs state that Parse is an open source backend that can be deployed to any infrastructure that can run...

We hope to merge the Oracle Storage Adapter into the public Parse repository as soon as I can get all the tests to pass.

Hi Dough, that’s amazing to hear! Let us know how testing goes; if helpful we can post a tweet on our @ParsePlatform account to invite developers to help you with testing.

Hi Manuel,
That is all great and appreciated.
We have some work still to do.
Been running the suites in /spec
Hoping to get this completed within the first half of the year.
I am new to this so what would be the steps in getting the Oracle Storage Adapter integrated into the project? Pass all test suites? idk
And if you could tell folks about it @ParsePlatform, again greatly appreciated
Doug

I’ve been trying do this for a while with my MySql Adapter but didn’t have time. I believe there is a way to grab the /spec and override helper file. I’ll look into it as there is a plan to move adapters to a separate repo 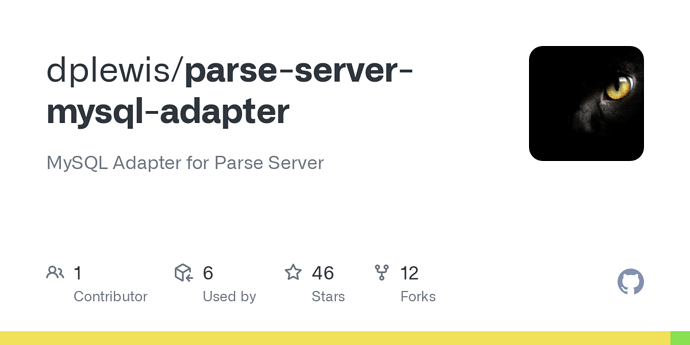 MySQL Adapter for Parse Server. Contribute to dplewis/parse-server-mysql-adapter development by creating an account on GitHub.

I am new to this so what would be the steps in getting the Oracle Storage Adapter integrated into the project?

We currently have all DB adapters inside the Parse Server repository. We plan to move the adapters into separate repositories (or convert everything into a mono-repository), but that hasn’t happened yet. You are right that technically you’d want to run all the tests in Parse Server using the Oracle DB adapter. We don’t have a concept yet for how to do that.

The tests are specified to run for either MongoDB or Postgres. Even the test syntax is tailored to these 2 adapters, which allows to define to run a test for only a certain adapter or even a certain version of the adapter. Maybe we’d have to redesign the test syntax to be more adapter agnostic.

For example instead of adding the adapter definition to the test, the adapter could define which tests to run and which to ignore via a config file that is part of the adapter. Then the Oracle DB adapter could import Parse Server as a dev dependency, add itself as DB adapter and the tests would run according to the adapter’s config file. Just an idea, but again, there is no clear concept yet.

And if you could tell folks about it @ParsePlatform, again greatly appreciated

What would you like to communicate? Should people test the adapter, or what should be the call to action? Maybe we should solve the testing issue above first before we invite a lot of developers. And maybe let’s also try to address the license questions at some point which we talked about briefly some time ago, to bring more legal clarity for developers.

As far as testing goes, we have been working in the current structure and its working fine, we have about 1800 passing.

I would like to communicate the Oracle support for Parse and, possibly have folks kick the tires. Or wait.
If you are suggesting having the Parse Community help fix tests, well, that would be great. It would require getting the code merged sooner rather than later. Please let me know next steps

I think we talked about license / copyright questions some time ago here in the forum.

No worries. I was away for surgery but back at it
I continue to fix the test suites in the meantime

Hi Dough, great to see you back! Let me know if you need anything…