I stumbled upon a recommendation in the Parse Server GitHub readme and Parse Server docs where we recommend users to sign-up at Mailgun, a commercial 3rd party service:

Verifying user email addresses and enabling password reset via email requires an email adapter. As part of the parse-server package we provide an adapter for sending email through Mailgun. To use it, sign up for Mailgun, and add this to your initialization code…

However, there are also a number of other email adapters for Parse Server: 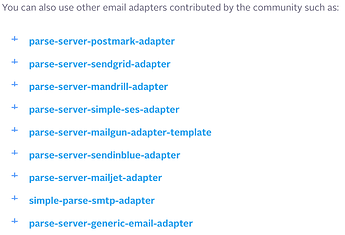 Notably also adapters who do not rely on a commercial email service, like the simple-parse-smtp-adapter.

Since @Tom already had the idea of adding ads, how about approaching Mailgun and trying to make a compensation deal for driving leads into their funnel? I guess we would need some site access stats, maybe offer them to add a hyperlink and their logo, maybe incorporate a promo code?

We would basically relaunch some form of partnership Parse already had with Mailgun back then.

We may also do this with other 3rd party services, like hosted DB provider (e.g. MongoDB) or cloud hosting (e.g. AWS).

To my knowledge the Mailgun adapter is the only officially maintained email adapter so I’m not sure it’s a recommendation as much as it is just the only official option - although there may have been some historical maintainer bias.

I personally feel that a referral deal is a much bigger step than ads (which tend to be very obviously commercial etc) but it does depend very much on how it is presented and how transparent one is. I wouldn’t feel comfortable with it if the commercial link wasn’t clear (although maybe there would be a legal requirement to disclose anyway?) and/or if alternatives were not also presented.

Nonetheless, it’s an interesting idea, would you be willing to pursue it if it was given the go ahead?

I agree, I had the same in mind, we wouldn’t want to suggest a technology / service provider because of a partnership when it may not be best one for a certain use case. I think we are actually currently lacking this transparency, because we mention a number of commercial services through-out our docs and it is not clear for the reader why we do that or what the relationship is.

Nonetheless, it’s an interesting idea, would you be willing to pursue it if it was given the go ahead?

I think if nothing else it would be interesting to give it a shot, but I couldn’t guarantee my support without knowing details of a potential deal.

In terms of stats, there’s quite a bit available from the forum and a limited amount in GitHub. There is google analytics in the main site and/or the docs site but I have no idea if we can access that account and personally would like to remove GA (sorry off-topic I know!).

I couldn’t guarantee my support without knowing details of a potential deal.

We would of course discuss any steps within the core team and I would assume the core team to take part or be closely informed in the deal discussions.

Before we even think about deal making, the initial question that comes to my mind would be for us internally, as to what is the legal status of the Parse Community and what is the legal framework under which it can conduct such business. The ToS for example say:

To use the forum, you must agree to these terms with Parse Community, the company that runs the forum.

But is “Parse Community” actually incorporated or a registered organisation?

I don’t believe the Parse Community has any legal status, the ToS is just default Discourse copy. I think as is we would have to conduct any deals as individuals.

Interesting, maybe we can use this as an opportunity to officially register a Parse Foundation to have a legal status.

Does anyone remember whether creating a Parse Foundation was a topic when Parse went open source? @dplewis

I just looked at the license that says:

As of April 5, 2017, Parse, LLC has transferred this code to the parse-community organization, and will no longer be contributing to or distributing this code.

I wonder what the “parse-community organization” was from a legal standpoint.

I’d start benchmarking other Open Source communities if they charge for listing possible integrations in the docs. But for sure we can at least review and remove the integrations that are currently now working well.